Located in the heart of Central France, sits the pretty town of Aubigny sur Nere and I’m lucky enough to have a conversion de grange just a few kilometres away. This fascinating town was completely unknown to me until we began the laborious job of installing electricity into what we laughingly called ‘the house!’ Turning up early one morning to battle with French bureaucracy we were stunned to see a huge metal sculpture in the middle of the town’s main roundabout. It was most definitely a Scottish Piper! Aubigny sur Nere is a wee bit of Scotland it would seem, even though a big white arrow reminds British drivers they must go right at the island! 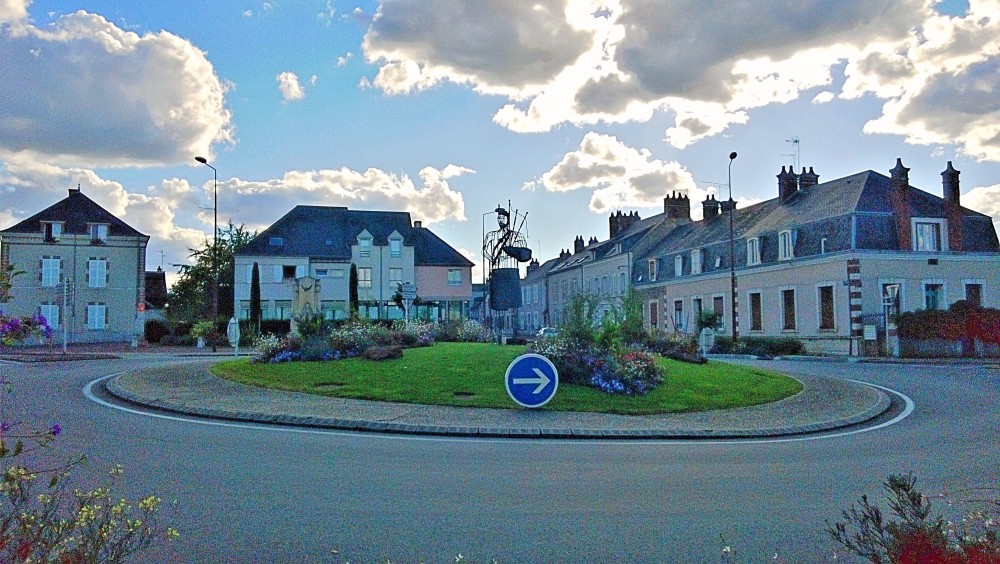 A walk down the high street reveals a mixture of French and British culture. An Old fashioned red telephone box stands by the tourist office together with an all too familiar red pillar box, which is actually used for the mail. Old medieval houses lean against each other for support  and amongst them stands Mary’s Cottage, a beautiful half-timbered house that looks like it has been transported lock-stock-and-barrel from a Scottish village. Tartan decorates cafe windows and the beautiful multi-turreted château in the centre of Aubigny boasts a huge Scottish Coat of Arms.

So why is Aubigny sur Nere a wee bit of Scotland? Well, here’s the history bit. For over 400 years, the town was ruled by the Scottish Stuart Family. During the reign of the French King Charles V11 (1445-50), John Stewart of Darnley, a member of the Stuart dynasty, came to France with an army of Scottish soldiers to fight for the French. He was awarded the town of Aubigny sur Nere for his services to the King. The family continued to live in the town for many centuries. Although I have to say they didn’t have opticians then!

To celebrate their relationship with Scotland and the Stuart family, Bastille Day, surprisingly,  is given over to all things Scottish. Kilted Pipers parade down the main street, shops and cafe’s are decked with Scottish flags and coats-of-arms. The medieval château and museum is open to the public and for those wanting to explore for longer than just a day, there are plenty of hotels to choose from, and plenty of restaurants serving, not haggis, but delicious French cuisine. Just as an after thought, there is a divine ice-cream parlour/patisserie  on the main street. Try it. Aubigny sur Nere is a wee bit of Scotland.

On Travels Love and Life

BY GRACE THROUGH FAITH

Creativity Is a Wild Thing

Adventures and mishaps in science fiction, fantasy, and mystery

Life is an adventure - from camping in the Arctic to hunting for errant single socks to navigating the world of writing.

Start your journey of self discovery

One Man, One Van and No Plan.